In 20 hours I'll start my most challenging sportive event of my short career. 75 kilometers in a relatively flat terrain will be a new experience for me. I plan to finish in Hamburg after about seven to eight hours. But time is not important, my only goal is to finish in a good condition. I plan to run in a group with some other members of the ForumTeam. Hopefully we'll find a common speed. Otherwise it will be quite a lonely run, cause 80 participants easily spread out over such a distance.

The weather forecast is around zero to two degrees with a bit of snowfall. Well, I don't care about the snow, but hopefully we'll not have the wind against us.

See last year's report from Manfred (in German) including some photos if you're interested. 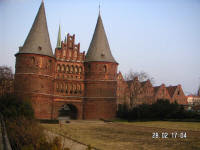 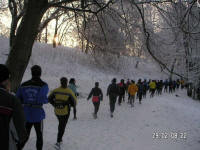 Wish you the best, Jolle!
PS: I've got a job in Mannheim starting in March. Therefor I'll have to move next week. But first I'll concentrate on running :), so more on that later.
Eingestellt von Jolle um 12:19 PM
Email ThisBlogThis!Share to TwitterShare to FacebookShare to Pinterest
Labels: Marathon, Running, Snow, Ultrarunning