Marcelino from Korea
Last weekend a college friend from Korea, Marcelino, made it to Ingolstadt with his girlfriend. He was the one who helped me most over there, showing us around, organizing a mobile contract, helping us getting a bank account etc.. So now it was my turn to give back something and I showed them around town a bit, making it to the Altmuehl valley, to Eichstaett and into several Biergarten (beer gardens). They left yesterday morning to continue their Europe trip. - Oh, and thanx for the soju & co you brought. I'll have some more happy moments remembering Korea.

PS to the Tour de France: Well, the tour is over, Jan won the second place for the 5th time. But if you see his overall results at the tour (one 1st place, five 2nd places), it is still a phantastic career and enough to make him a hero.
Eingestellt von Jolle um 4:48 PM No comments:
Email ThisBlogThis!Share to TwitterShare to FacebookShare to Pinterest

It's the final showdown...
...tomorrow in this year's Tour de France. Ullrich is 1:07 minutes behind Armstrong, a almost unmakable task. But still there is hope. On the pic below you can see him after the time trial in Eurodisney near Paris in 1997, the year he won the yellow jersey and with it the tour. It shall bring him luck. I like the pic anyway, it's my desktop motive for a while now.

34 seconds...
...until the defeat of Armstrong. In the time trial today Ullrich took Armstrong almost 2 minutes and is now on second place just 34 seconds behind in the general classement. Simply magic. Will he win the Tour a second time or will he finish second for the fifth time? The Tourmalet on Monday or the last time trial will reveal the truth. Sadly the other rider from Mecklenburg, Jens Voigt, had to give up having stomach problems yesterday. Lets hope the best for all of them.
Eingestellt von Jolle um 9:49 PM No comments:
Email ThisBlogThis!Share to TwitterShare to FacebookShare to Pinterest

Le Tour de France
Today is the first rest day of the Tour 2003, and the riders need it badly. There has been major accidents almost every day, leaving many wounded like the Austrian Haselbacher on the pic below, who fell during a sprint arrival with over 60 kph. For us spectators, it has all been very exciting. Jan Ullrich is just a little over two minutes behind Lance. With the Pyrenees still to come, this is not the end. So let's hope that all riders recover today and that the next stages will be as exciting as the past ones.

I went visiting Julia in Stuttgart the past weekend. Friday watched Charlie's Angel's: Full Throttle in the Corso-Cinema in Vaihingen. Thanks to the U.S. Army base nearby it shows all new movies in the original language and Julia lives just some 300 metres away. Really cool. On Saturday we intended to get up early to drive to Lichtenstein (do not mistake it for Liechtenstein) in the middle of the Swabian Alb. We did not get up early, but we drove there anyway. After visiting the Lichtenstein castle, which is nicely situated on the edge of a mountain cliff, we started on a 18-km-hiking tour to the Bärenhöhle (bear cave) and the Nebelhöhle (fog cave). Our path led us directly over a golf course, through nice valleys and over some 800 m high mountains. We arrvied back at the castle around 7:30 pm before returning to Stuttgart and fading out the beautiful day with a barbecue on the balcony.

Sunday is a rest day, so we slept until after noon, had a late and long breakfest and just relaxed in the sun. Later around 7 pm, when it started cooling down a bit we took our skates and drove to the Rosenthal-park next to the botanical garden. This park itself is a paradise for skaters, but the best is that it is connected to the three castle gardens which lead directly to the city centre. Alltogether they accumulate to several kilometres of perfect skating lanes in a nice surrounding (small lakes, rivers, bridges, pubs, animals from the zoo...) including flat as well as hilly terrain. I wish Ingolstadt had the same.

Yesterday I went back to Ingolstadt, an ever interesting odyssee. This time I was so clever to buy my train ticket in Stuttgart-Vaihingen instead of Stuttgart-Central-Station to save the city train fare which is included then. But my cleverness was undermined by my stupidity. Don't ask me how, but a ticket definitely can get lost on a 10 km train ride, especially if it's Jolle taking care of. So I had no chance but to buy a new ticket at the central station. Surprisingly the new ticket was cheaper and my new schedule shorter than at first. These fucking staff in Vaihingen had sold me complete crap telling me of trains not running which I later went on. I love the Deutsche Bahn. I never gets boring. But I'll come back one day. And then...

Eingestellt von Jolle um 5:20 AM No comments:
Email ThisBlogThis!Share to TwitterShare to FacebookShare to Pinterest

The biggest News-Source in Germany... 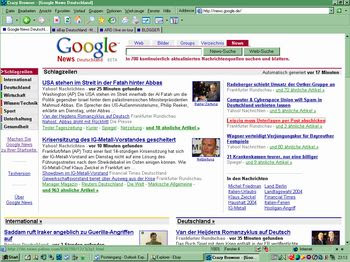 Google started its price-decorated news service in Germany today. Visit it at news.google.de.

So from now on you'll be able to keep an eye on over 700 news sources in German language. Always get the latest news as well as search for older articles. Articles are categorized and always several sources are linked to, if available. Moreover you can see instantly how old an article is, or more exactly, when it was found by the robot. I wonder if they will develop new categories for regional information, too. This would be the cream on top.
Eingestellt von Jolle um 11:32 PM No comments:
Email ThisBlogThis!Share to TwitterShare to FacebookShare to Pinterest

It starts again...
...le tour de france. This time its 100 anniversary. And Jan Ullrich is already in front of Armstrong. What a prolog. But we'll see who is first in the end.
Eingestellt von Jolle um 7:22 PM No comments:
Email ThisBlogThis!Share to TwitterShare to FacebookShare to Pinterest
Newer Posts Older Posts Home
Subscribe to: Posts (Atom)